In mid-19th century when Japan was opened to the world, major export goods was raw silk and tea. In midst of such background, there was movement to develop the tea business in the Nishio region, which is blessed with a natural environment of good water quality, soil, and weather that is suitable for producing tea. During this period in 1888, the first president Sugishita Aijiro found Sugishita Shoten, a tea and indigo plant production company.

Nishio Tea aimed for high-quality tea from the beginning

The feature of Nishio Tea founded in early Meiji era was that they aimed to produce high-quality tea from the very beginning. This was the start of the foundation for good tencha production, which later became the raw material for matcha.

In 1904, the Hazu-gun Seicha Doshikai was organized with tea field owners of Kamimachi (where AIYA headquarters is located). The organization has been taking initiatives for the tea production business by holding tea fairs and conducting tea production training programs for improved technology. Technology and quality for high-class tea was further improved and sales channels were expanded. Customers expanded from within the prefecture to Kanto and then to Kansai areas.

Shifting from gyokuro to tencha of a higher value

Tea producers in the Nishio area including Sugita Shoten, aimed to produce gyokuro with higher commercial value. They established a cultivation technique of covering the tea trees before harvest.

From tea and indigo to tea only

Aiya Tea Store Limited Partnership Company was established in 1922. When the appointment of the second president, Aijiro, the indigo production and sales that started since early Meiji era was discontinued and the company focused on tea production, and made efforts to improve tea production technology and to expand sales channels. During this time, Nishio Tea genuinely started to change from gyokuro to tencha.

Reinforced organization and increased production due to focusing on tea only

Focusing on only tea, reinforced the organization in many aspects. Productivity increased by constructing a new office building and tea production factory. After the Mikawa tencha machine was invented in 1930, production increased and Nishio developed dramatically as a matcha producing area.

At the end of the Greater East Asia War, tea fields were hit by a crises of having to convert the fields for growing potatoes and wheat which will serve as food. In addition, the Tonankai earthquake occurred in December 1944 and the Mikawa earthquake occurred in January 1945. Nishio-shi was near the epicenter and was hit by a seismic intensity of 7. The office building was completely destroyed. The war ended in August 1945. The tea producers in Nishio continued to produce good tea in spite of their suffering. Four years later, contracting tea field area exceeded 70 hectares and tencha production grew stably.

Production capacity boosted along with reconstruction

In 1950 when Japan was in the reconstruction mode, AIYA Limited was established. The third president, Aijiro, inaugurated and boosted production capacity.

Challenged new market development in around 1960. A new path was found by changing the fixed idea of matcha as a drink. The company aimed for the expansion of sales channel for matcha as a food processing material.

Production of the first organic matcha begun in Japan

The third president Aijiro cultivated tencha fields in the mountains of Toyota-shi, Aichi-ken (formerly Shimoyamamura). There, efforts were made to produce Japan's first organic matcha, which at that time was considered very difficult. The tencha fields were destroyed over and over again from pests, rain and the sun. The forth president Aijiro realized the organic matcha both human-friendly and environmental-friendly.

AIYA started exporting to North America in 1983 after expanding sales channels nationwide and boosting production. Japan started to disseminate matcha culture to the world in this year.

AIYA shifted the appraisal standards of matcha to scientific analysis from relying on human sense and established a Quality Control Department in 1985. This enabled to indicate matcha quality objectively in figures. The objective data management ahead of its time contributed largely to exports and market expansion in the field of processed foods.

Establishment of Meihoenseicha, the manager and director of tea producers

In 1989, AIYA at the 100th anniversary established a raw material supplier, Meihoenseicha, Ltd. This year, the fourth president, Aijiro Sugishita, inaugurated and stabilized production and improved quality with the raw material producers.

In 2001, AIYA established AIYA America, a local subsidiary, (transferred to Los Angels in 2004). An European subsidiary was also established in Wien, Austria.

In the same year, AIYA obtained ISO 9001 assuring qualities in all stages of production (designing, development, manufacturing, installation and supplementary services). This certified that quality is assured even in the stages of designing and development as well as manufacturing and services.

In 2005, AIYA established a new Quality Control Department along with the introduction of new system and realized safety improvements. AIYA provides specifications that cover requirements from customers such as analysis of general live bacteria, colon bacilli, mold, yeast, tea component, and inspection of agrochemicals residue, 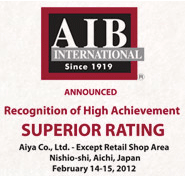 In 2007, AIYA achieved "Superior", the best grade both for the matcha refining factory and matcha production factory in the AIB food safety audit. AIB conducts guidance and inspection in accordance with "Consolidated Standards for Inspection" made by AIB uniquely based on various global laws and regulations. The rating results and certifications assures our worldwide customer the safety of our matcha products.

AIYA selected for the best "300 energetic SMEs in manufacturing"

In 2007, AIYA was selected as one of the best "300 energetic SMEs in manufacturing" and was awarded the grand prize; the excellent company prize at 41th Good Company Award in November of the same year.

AIYA has developed matcha which preserves its color even in the secondary process. That was a longtime dream of the matcha industry. In 2009, the longtime studies generated the "Greeminal series", color preserving oil-coated matcha.

In 2011, AIYA established "Saijoen", a sweets brand. Development and sales of matcha sweets began with the concept "exciting, genuine, friendly" to provide some motivation for our customers to become more familiar with matcha.

AIYA obtained FSSC 22000 in 2014. With this a system for accelerating exports to developed countries was established.

AIYA was selected one of the "Global Niche Top Companies Selection 100" in 2014. The high global share and good management performance in the "matcha" field was acknowledged.